The winners of the 4th Annual Queen’s Students’ Union Business Idea Awards have been announced at a special ceremony held at the Union last week.

Fashionable mobile apps, videos on how to share skills and gadgets which help you find your keys were just some of the winning proposals at the What’s the Big Idea? Awards which are organized by Enterprise SU, a dedicated enterprise, volunteering and employability centre for Queen's students.

Stena Line sponsored the Best Overall Business Idea Award which was won by entrepreneurial students Paul Kidd and Ciaran McCoy whose idea Top Up Tap, a pay as you drink dispenser won them £500.

Diane Poole OBE, Head of PR and Communications at Stena Line believes that the innovation shown by the young people shows great promise for their future careers.

“Creativity and innovation are two key components of business success,” said Diane. “It was truly inspiring to see how imaginative and focused some of the ideas were and I was delighted that Stena Line had the opportunity to be involved in this event.”

The Most Creative Business Idea, sponsored by Ormeau Business Park was awarded to Sarah Cassidy for her unique Funbrella approach to customizing umbrellas.

Enterprise Officer Lynne Weir was impressed with the high standard of this year’s entries and the quality of creative ideas that were submitted.

‘”Extra-curricular activities such as this competition helps ignite the creative spark amongst many students,” she said. “This can only encourage and reward entrepreneurial behavior.”

Over the past number of years the What’s The Big Idea? Competition, which is open to all undergraduate and postgraduate students studying at Queen’s who have an exciting and creative business idea, has attracted several hundred entries.

“Recognition should also be given to QUB for their commitment to embedding enterprise education across the faculties,” she said, “encouraging both undergraduates

and graduates in maximizing their opportunities whilst seeking to explore self employment as a potential option.”

Judge David Gibson, an enterprising academic from the QUB Management School who has been named world number one Enterprise Educator by the United States Association of Small Business and Entrepreneurship was also present to recognise the achievements of the students.

He said: “These young people have developed enterprise skills to create and implement business ideas which could improve the economy of Northern Ireland. It is vital that students and those who work in business, the public and the voluntary sectors are helped in developing their entrepreneurial potential to ensure the sustainability of their organizations.”

Thirteen categories in total, including Best Technological Idea and Best Not for Profit Idea, were presented with an overall prize fund of £2300 being distributed.

Stena Line, an ABTA member, is an international transport and travel service company and one of the world's leading ferry operators.

Stena Line operates in three business areas: Scandinavia, the North Sea and the Irish Sea with a network of 22 strategically located ferry routes in Europe. Stena Line has a modern fleet with a total of 37 vessels including fast ferries (Stena HSS), traditional combi-ferries, RoPax ferries for freight and passengers, and pure cargo ships.

Stena Line is a stable and profitable group and is committed to providing passengers with the best service and experience possible.

During 2009, approximately 15.4 million passengers travelled with Stena Line. 3.3 million cars and 1.6 million freight units were transported during the same period. 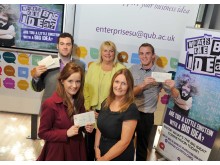