THE Belfast Giants have secured their biggest re-signing of the season with Stena Line announcing title sponsorship of the team for a third successive year.

The Giants, who won their opening game of the year convincingly 5-0 against the Edinburgh Capitals at the Odyssey Arena, are expected to be one of the main challengers for this year’s Elite League title and Stena Line will play a key role in their bid for glory.

Northern Ireland’s leading ferry company, which has supported the Giants since 2008 with title sponsorship for the past two years, will ferry the Giants players and fans to away games in the UK throughout the season as well as travelling teams visiting Belfast. Stena Line will also join forces with the hard hitting ice hockey stars in their community work.

The partnership has already proved a huge success with the Giants winning the Monteith Bowl (League Title) in the first year and being consistently one of the tops teams in the league and cup competitions.

Stena Line’s Head of PR and Communications, Diane Poole OBE, said:  “We’ve supported the team since 2008 with title sponsorship since 2011 and it’s been great to see the Giants develop as an entertaining but formidable ice hockey side. They have brought continued success to Belfast and we are delighted to be in partnership with them.

“We hope they can build on their fantastic achievements and secure more glory this season. Stena Line certainly wishes them well,” she added.

Todd Kelman, General Manager of the Stena Line Belfast Giants said:  “Stena Line’s patronage heralded one of the most successful periods the team has ever had so we’re delighted to be renewing our connection with the leading ferry company.

“We have our sights set firmly on another league win this year and I can assure you the players are determined to bring another Championship back to the proud city of Belfast.  We’ll also be continuing a lot of our outreach work and educational programmes with communities in Northern Ireland so we are prepared for a very busy year,” Todd added.

The Giants Community outreach programmes aim to improve the physical health and mental well-being of young people by developing resources that encourage young people to remain in education.

Stena Line is the market leader on the Irish Sea, offering the biggest fleet and the widest choice of routes from Ireland to Britain, including the Belfast to Cairnryan, Belfast to Liverpool (Birkenhead), Dun Laoghaire and Dublin Port to Holyhead, and Rosslare to Fishguard routes.

Stena Line operates the biggest fleet and the widest choice of routes between Ireland and Britain with an extensive route network including Belfast to Cairnryan, Belfast to Liverpool, Dun Laoghaire to Holyhead, Dublin Port to Holyhead and Rosslare to Fishguard. 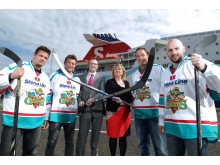 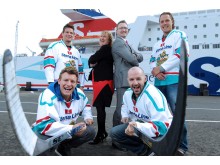 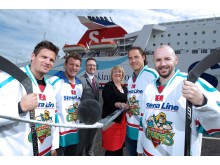