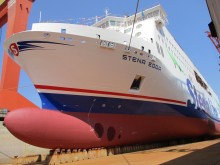 ​Leading ferry company Stena Line has achieved another major milestone in its fleet investment program with the ‘float out’ ceremony of the second vessel in its next generation E-Flexer series. The second vessel will be named Stena Edda* and follows the Scandinavian heritage decided for the five new vessels that are being constructed at the Avic Weihai Shipyard in China.